Powell lens looks more or less like a round prism, but it has a curved roof line, as shown below: 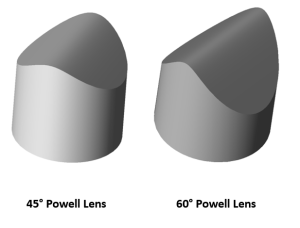 When collimated laser beam with a Gaussian energy distribution across the beam width enters the Powell lens, the laser energy will be redistributed within an angular range defined by the fan angle, and become a uniform laser line:

To get the best quality of the laser line, the Powell lens needs to be optimized according to the laser beam width and the fan angle. A Powell lens optimized for a given beam width is usually suggested to work with the designed beam width. If worked with a narrower beam width, the resulted laser line will have decreased intensity at the two ends, and if worked with a wider beam width, the resulted laser line will have increased intensity at the two ends. The following plot shows the simulated energy distribution profile of a 60-degree fan angle Powell lens optimized for 3mm beam width working with 1mm, 3mm and 5mm beam, respectively: